URBL SHIELD acts as hepatoprotectant and supports the health of your liver, which has the most significant impact on the condition and purity of blood in your body. At the same time, it helps to enhance memory and overall cognitive health. *

SHIELD is a potent functional supplement with ~17,750mg of proprietary alkaline greens blend and superfoods.

The alkaline greens blend combines bacopa, chlorella, spirulina, and milk thistle in a powerful formulation to detox your body and support / protect liver function. Bacopa is a “nootropic” herb that improves your memory and cognitive abilities and protects your body from oxidative damage and inflammation. Chlorella and spirulina are nutrient-dense algae that provide you with good amounts of plant proteins, antioxidants, and intestinal sunshine. Shield also helps to relieve digestive disturbances (dyspepsia). *

SHIELD helps to fill in nutritional gaps while reinforcing your mental health during busy days.

Get ready to fuel your daily adventures with URBL SHIELD!

Nootropics: Brahmi (Bacopa Monnieri) is prized in Ayurveda and THM for its ability to improve memory and enhance cognitive abilities. It helps to protect brain cells, restore your nervous system when exhausted from ongoing stress, and boost cognitive ability. [1]*

Hepatoprotection: Brahmi is a great friend to your liver as it not only possesses good hepatoprotective properties, but also helps with liver restoration post detoxification. [2]*

40% Bacopasides: SHIELD consists of a potent grade of brahmi with 40% bacopasides.

Liver Protectant: Milk Thistle is the most well-researched plant in the treatment of liver disease and is traditionally used as a liver protectant. Silymarin, an active ingredient in milk thistle found in high concentrations in its seeds, protects the liver by reducing free radical production. It helps to counter the effects of alcohol consumption, pesticides in food, heavy metals in water, and pollution in the air we breathe. [1]*

80% Silymarin: SHIELD consists of a highly potent grade of milk thistle with 80% silymarin.

Nature’s Best Detoxifier: Chlorella is a freshwater single-celled alga that is packed with antioxidants and 9 essential amino acids. [1] [2] [3]*

Chelator: Chlorella can bind itself to heavy metals and unwanted neurotoxins. It works even better when combined with coriander – chlorella pulls toxins out of cell membranes and coriander disperses the toxins out of the body. [4]*

Chlorophyll: Chlorella is a good source of chlorophyll and is commonly known to help with blood detoxification, odor control, gut health, and general immune system support. *

Athlete’s Ultimate Superfood: Spirulina is a freshwater blue-green alga with about 50 to 70% protein. It also contains nutrients like vitamins, fatty acids, amino acids, minerals and phytonutrients. The high phytonutrient content is what makes spirulina a potent superfood supplement. [1] [2]*

Alkaline: High level of chlorophyll makes spirulina an alkalizing superfood. When your body is trying to balance its pH on its own, it often sacrifices calcium in the process. Thus, taking chlorophyll-rich food like spirulina (and chlorella) promotes increased bone mass. [3]*

Mobilizer: Coriander is very efficient at mobilizing mercury and other neurotoxins out of your body. It works even better in combination with chlorella, as chlorella pulls toxins out of cell membranes and coriander disperses the toxins out of the body. [1]*

Detox: Coriander is commonly used in many parts of the world in combination with mint and lemon to remove toxicity from the body. It is one of the easily available pantry regulars that can help you stay healthy inside and out.

Fennel contains unique phytonutrients with detoxifiers, antioxidants, and stimulants. It is a rich source of vitamin C that improves general immune system health, produces and repairs skin tissues, helps form collagen, and acts as an antioxidant against the harmful effects of free radicals. A rich source of potassium, fennel also helps to improve cognitive abilities and regulate blood pressure. [1]*

“An apple a day keeps the doctor away” Need we say anything else????

Lemon, a natural antiseptic known for its therapeutic properties, enhances liver’s ability to remove toxins and reduces acid buildup, which is the main cause of inflammation. Packed with vitamin C, lemon helps to cool and alkalize your body, aids in digestion, and strengthens your immune system.

Honey raises levels of health-promoting antioxidants in the body, helps to reduce inflammation, and boosts immunity. It provides an easily absorbable supply of energy in the form of glucose, making it ideal for active days and as a “pre- and post-workout” energy source. [1] [2]*

Himalayan Salt is believed to be one of the purest forms of salt available and contains more than “80 minerals and trace elements”. It is unrefined, unadulterated, and toxin-free. A small amount of Himalayan salt added to SHIELD helps you to replenish electrolytes. 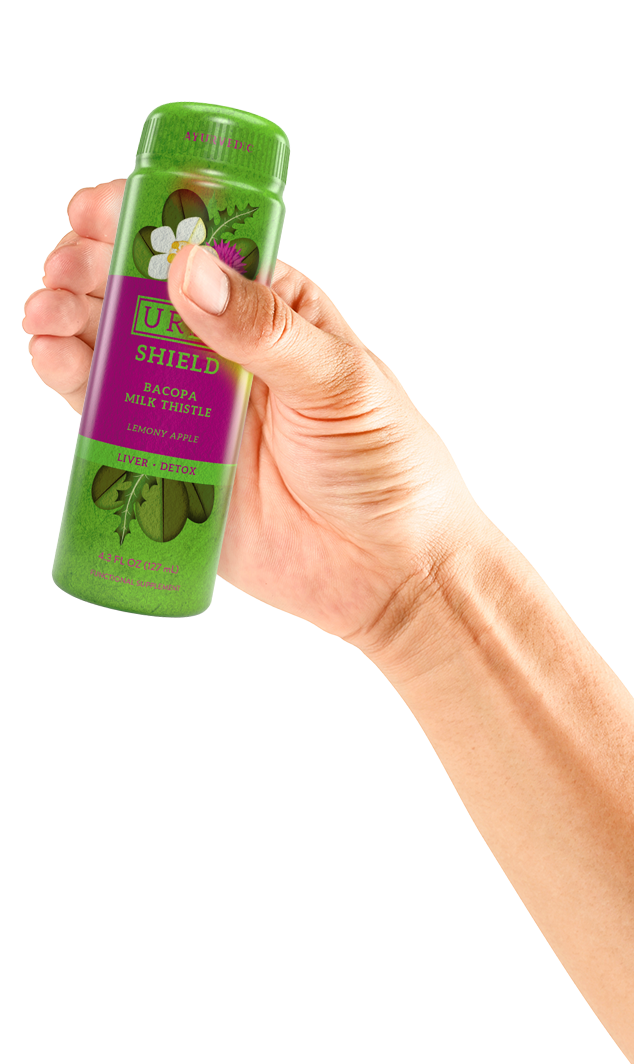 * Percent Daily Values are based on a 2,000 calorie diet.
† Daily value not established.
Other Ingredients: Himalayan Salt, Water, and Potassium Sorbate Preservative.

Manufacturing: URBL supplements are manufactured in a state-of-the-art GMP (Good Manufacturing Practices) and “NSF certified facility”, which has also been provided a Site License (SL) by NNHPD of Health Canada. A Site License is an official approval by the Govt. of Canada that the products manufactured on site are safe and of the highest quality.

Quality and Safety: We have collaborated with an independent bio-analytical testing laboratory to run every single production batch through more than 15 different tests for contamination by heavy metals, pesticides, and other harmful compounds, ensuring the supplements are safe to drink and of the highest quality.

SHIELD is used as hepatoprotectant / liver protectant and to support liver function and health. *

It enhances memory acquisition and retention and overall cognitive health. *

It is a source of antioxidants that fight against the cell damage caused by free radicals.

Children, pregnant or breastfeeding women, and individuals with known medical conditions should consult their physician prior to use. Avoid taking with alcohol or products with sedative properties.

These statements have not been evaluated by the Food and Drug Administration. This product is not intended to diagnose, treat, cure, or prevent any disease. By completing this form, you are signing up to receive our emails and can unsubscribe at any time.

By completing this form, you are signing up to receive our emails and can unsubscribe at any time.